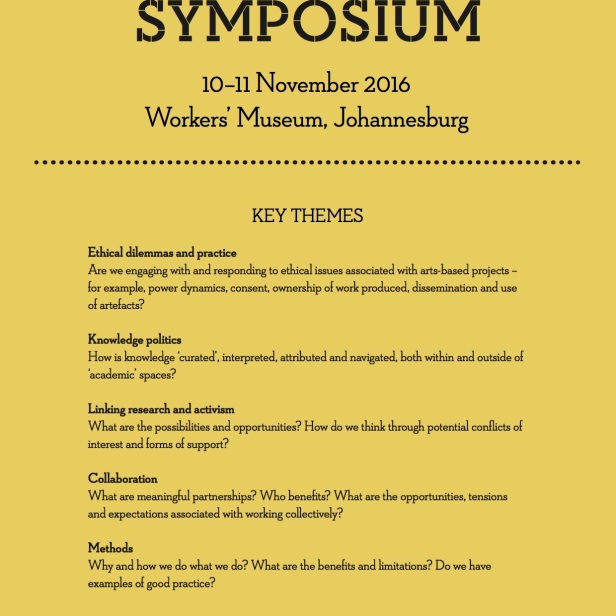 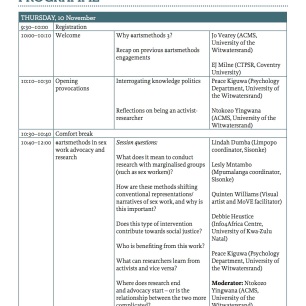 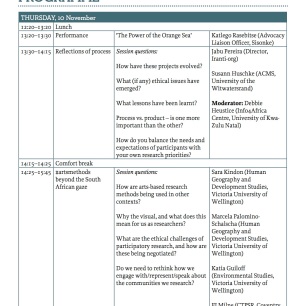 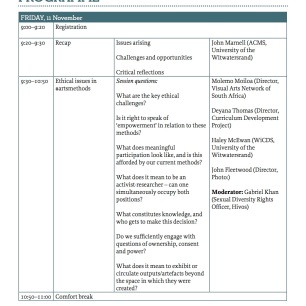 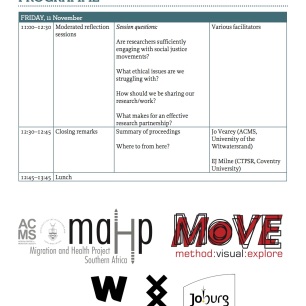 WordPress.com is excited to announce our newest offering: a course just for beginning bloggers where you’ll learn everything you need to know about blogging from the most trusted experts in the industry. We have helped millions of blogs get up and running, we know what works, and we want you to to know everything we know. This course provides all the fundamental skills and inspiration you need to get your blog started, an interactive community forum, and content updated annually.

Exhibition opening at #artsmethods 3 this week! 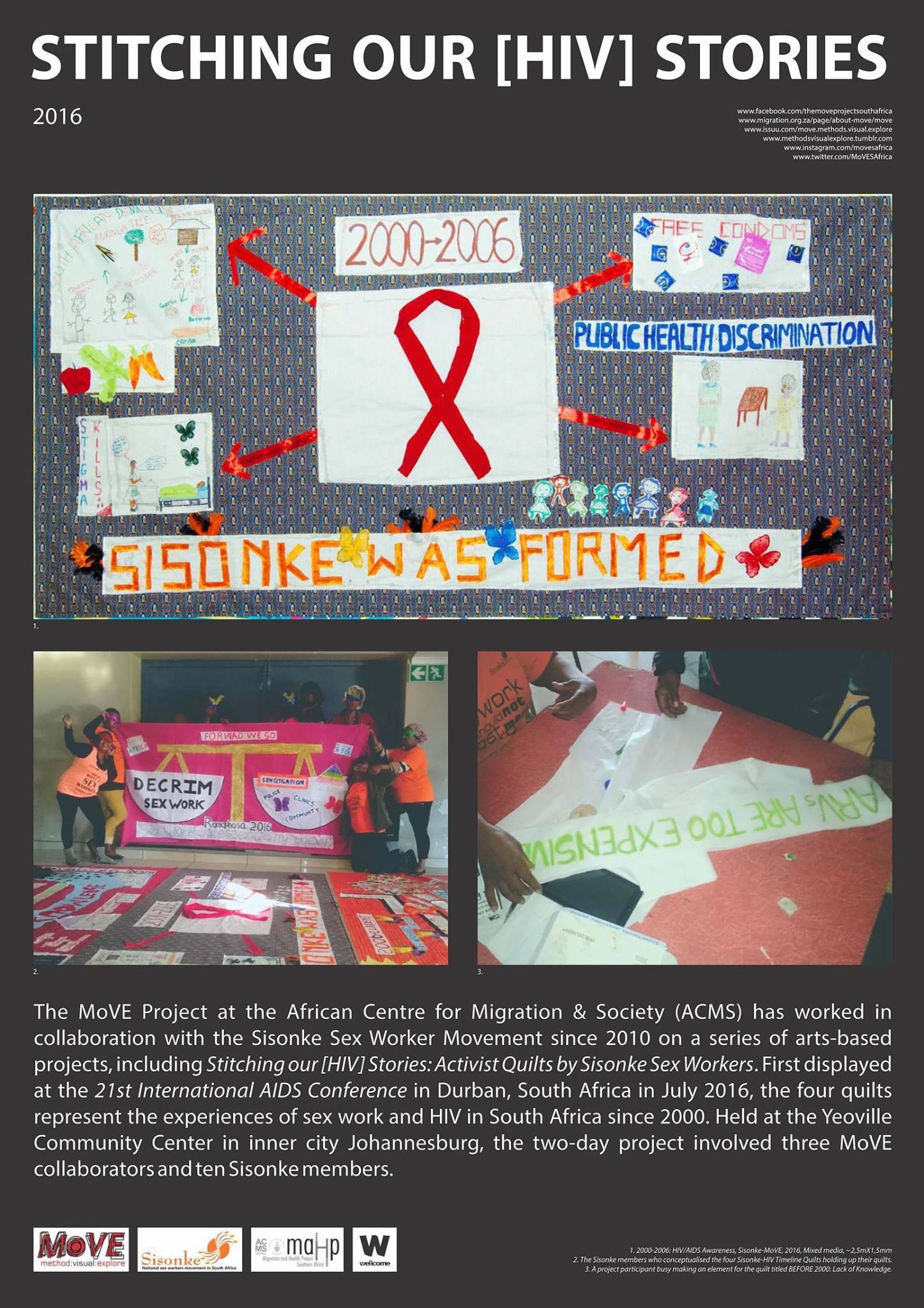 #artsmethods 3 provides a space for critical discussion around the opportunities – and challenges – provided through arts-based research, advocacy and activism.

We will work with participants to produce a series of blog posts and an online, open-access publication that reflects on this – and previous – #artsmethods symposium that have been held in South Africa and the UK.

Key themes to be engaged with include..

We are excited to be launching the latest MoVE publication during #artsmethods 3!

The sex worker zine project is a collaboration between the Sisonke Sex Worker Movement, MoVE, and the Migration and Health Project (maHp) of the ACMS, Wits University.

A free e-version of the publication – that can be read online or downloaded and distributed – will be available on the MoVE issuu site. 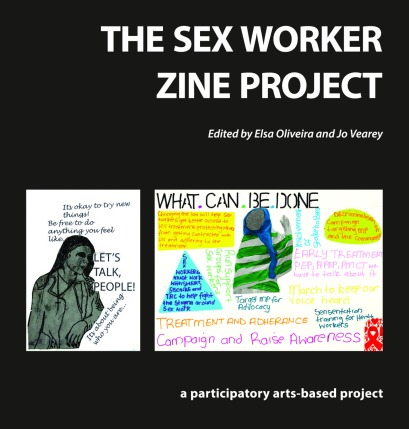 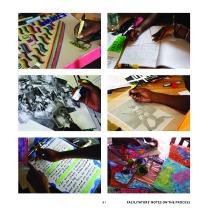 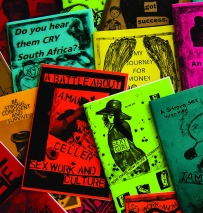 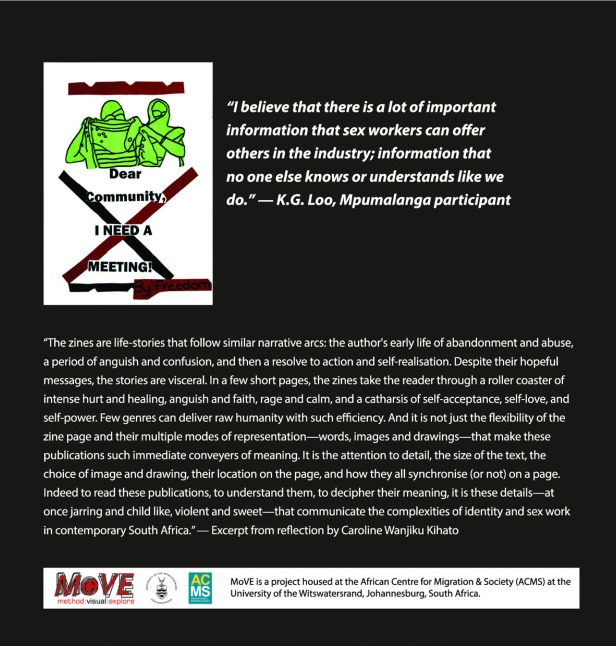 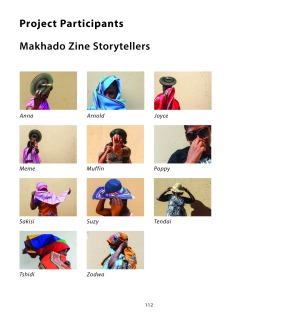 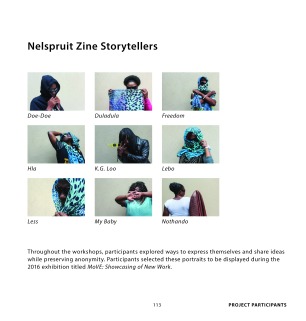 This is the third in a series of linked events exploring different arts-based approaches to research and activism. Taking place over two days, the symposium will bring together researchers, creatives, social justice campaigners and community members to reflect on the ethical and methodological opportunities and challenges of arts-based practices. Experiences from South Africa, Chile, New Zealand and the United Kingdom will be shared and discussed through facilitated dialogues.

Space is limited and RSVPs are essential.

For more information or to RSVP, please email john.marnell@wits.ac.za. 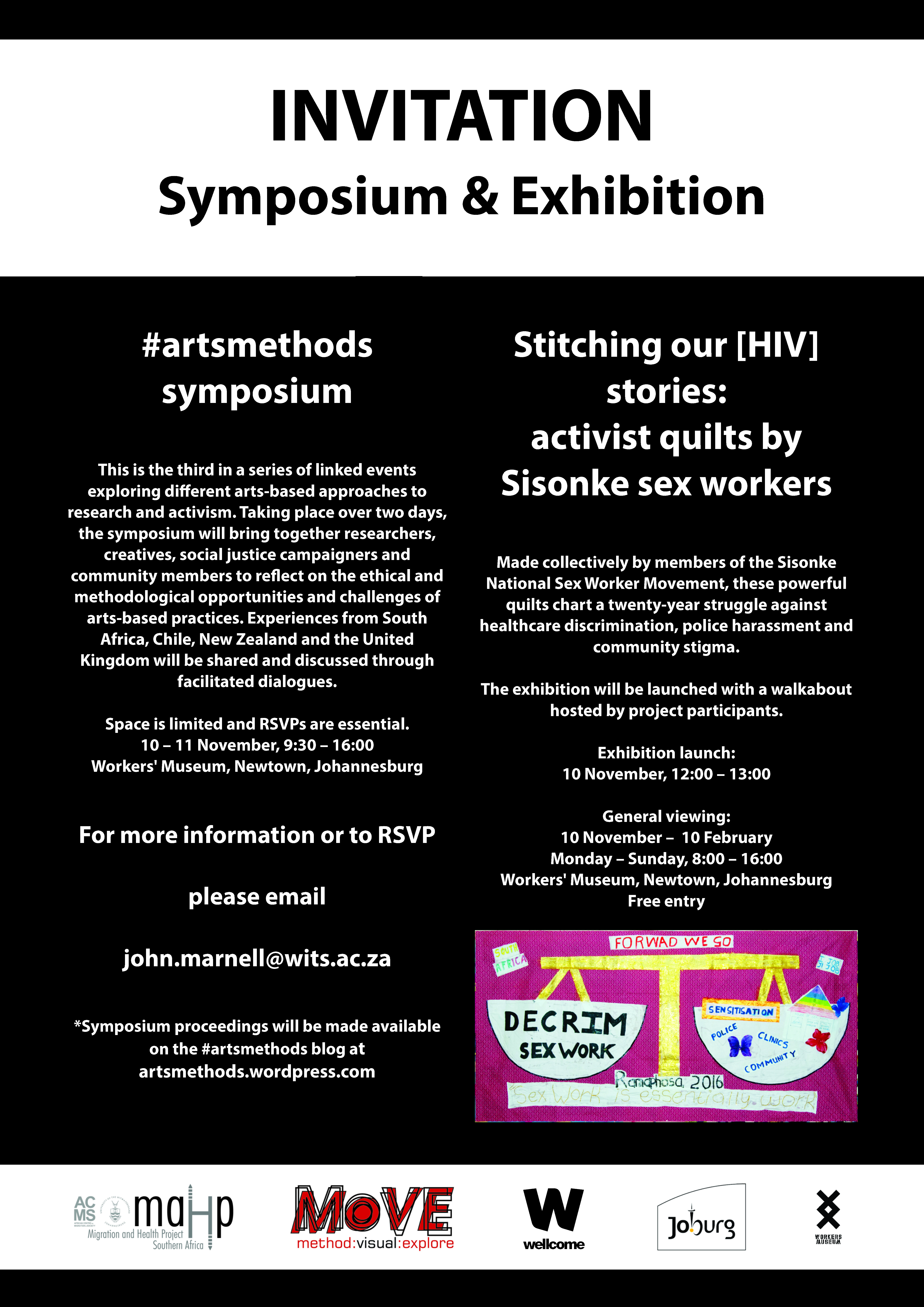 The 2nd #artmethods symposium was held in Coventry, 18 – 19th May 2016.  The symposium proceedings are available on Storify. 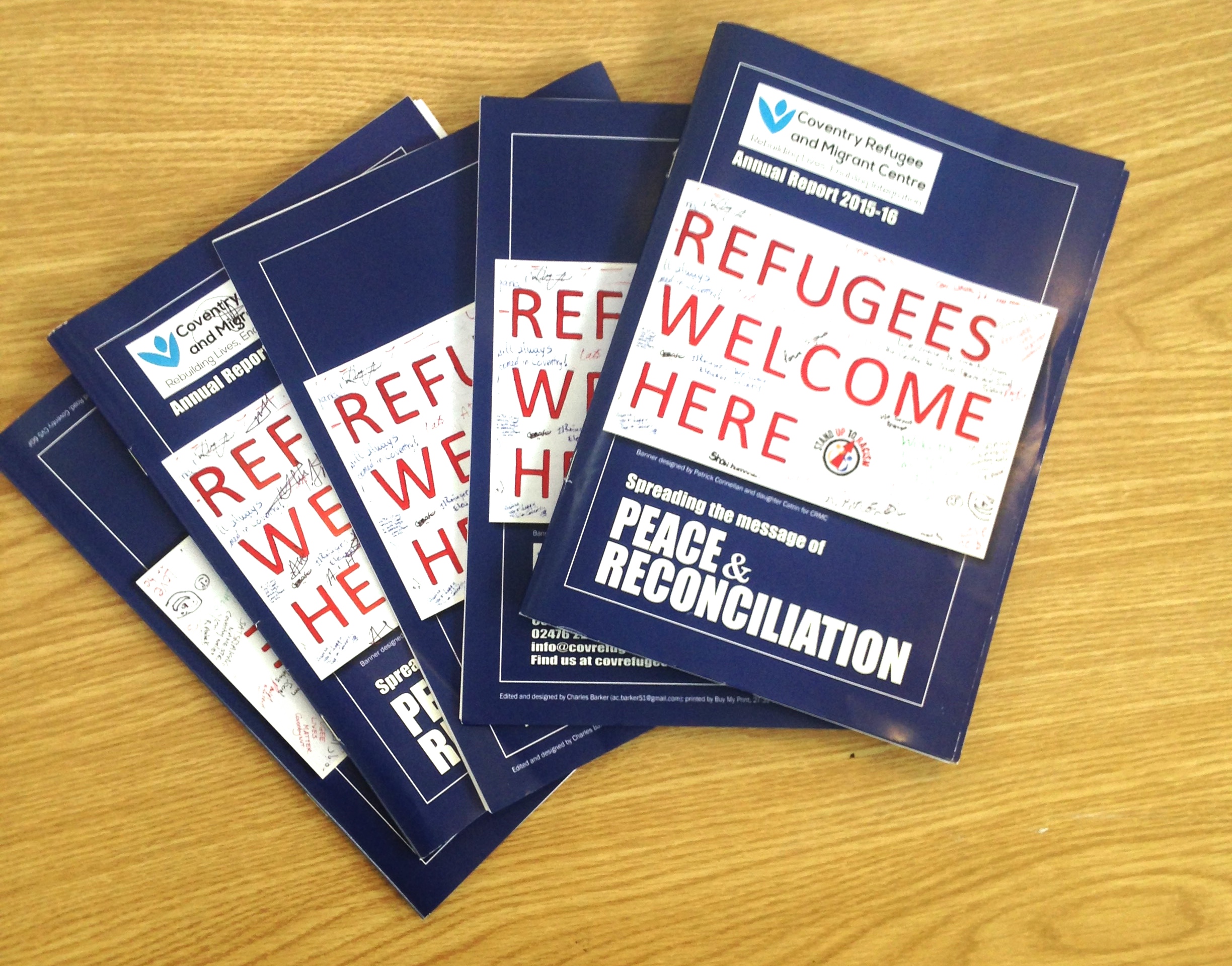 CRMC hosted a joint symposium between South Africa’s African Centre for Migration & Society and Coventry University’s Centre for Trust, Peace and Social Relations on May 18 & 19.

Last week the Coventry Refugee and Migrant Centre hosted a series of events bringing together activists, civil society partners and researchers from across the globe. The programme involved two exhibitions, discussions and workshops on using creative arts to produce research in collaboration with migrants engaged in informal livelihood strategies. These events are part of a developing partnership between the African Centre for Migration and Society (ACMS) at the University of the Witwatersrand, and Coventry University’s Centre for Trust Peace and Social Relations (CTPSR).

The Coventry-Johannesburg partnership was the “madcap idea” of Dr EJ Milne from CTPSR and Prof. Jo Vearey from ACMS. “We decided to hold a two-part symposium in South Africa and the UK looking at community-academic collaborations with migrants and refugees and arts-based research methods,” explained Dr Milne, a senior research fellow at CTPSR.

Dr Milne who organised the Coventry event said “Traditionally research has been undertaken by academics who do research on migrant and refugee communities, rather than in collaboration with them. Often the voices of members of these groups are omitted from the research process. We wanted to show our commitment to address this inequality and share ideas on how to make sure everyone who is involved in the research process is able to be included so that research projects are more sensitive to people.”

Generous funding is allowing us to run three events over a 12 month period in Coventry, Johannesburg and Vienna. The money was provided by the Newton Fund, part of the UK’s international development assistance.

“One of the reasons we held the Johannesburg symposium was to share publicly the work emerging from the various MoVE projects,” explained Prof. Vearey.

MoVE (method.visual.explore) is a mixed-methods project housed at the ACMS. The projects under MoVE have mainly worked with underrepresented migrant groups in southern Africa that face multiple vulnerabilities.  A central aim of MoVE is to share migrants’ lived experiences with a wider spectrum of audiences where the work can be used to support social justice movements.

“It provided us with an opportunity to exhibit full size body maps produced by asylum seekers, refugees and migrants, and zines created by migrant’s engaged in informal livelihood strategies. The symposium also provided a space for community members to perform original poetry and reads stories they had written about their lived experiences.

Dr Milne, who attended the Johannesburg event, was impressed by what she saw.

“I found it exciting that people were so confident,” she said.

“In the UK, we had people from refugee and migrant backgrounds interested in coming along to the symposium, but who didn’t feel comfortable speaking about their experiences in a public forum, or who felt intimidated having conversations with academics.”

The second part of the joint symposium was held at the Coventry Refugee and Migrant Centre on May 18 and 19 2016 and included representatives from South Africa, Zimbabwe, New Zealand, Canada and the UK. Similar to the Johannesburg event, the programme brought together academics, activists, artists and community workers who use creative arts-based methods to explore the experiences of asylum seekers, refugees and migrants.

According to Heaven Crawley, Professor of International Migration at Coventry University, the symposium was an exciting opportunity for people to share methods and findings, and discuss future international collaboration opportunities.

Using art is important because it allows people to communicate in a non-verbal way, but also because it results in work that can be seen by other groups and by the public, Prof. Crawley said.

As well as informal talks, discussions and workshops, the CRMC office in Bishop Street was transformed into a gallery with vibrant artworks from South Africa. There were two exhibitions. One was a series of beautiful photographs from the Metropolitan Nomads project and the other was an exhibition of body maps, poetry and narrative writing from Queer Crossings project: both exhibitions are a part of MoVE.

Elsa Oliveira, a PhD candidate and researcher at the ACMS and co-coordinator of MoVE described her work researching the lives of migrants engaged in informal livelihood strategies.

She explained that traditional academic methods, such as conducting interviews and surveys, can only go so far in encouraging people to tell their stories. She has been exploring other research techniques, including getting migrants to produce artworks, as these can help people to reflect critically on their lives and experiences.

Some of the art on display at the CRMC office is striking and colourful – a mix of words and images, often telling deeply moving stories. And that’s one of the aims of Elsa’s involvement: to create an end product that can be seen and appreciated by the public.

“Often we don’t get to hear stories of migrants and asylum seekers. These exhibitions are a way of putting their stories out there – stories created by the people themselves. That’s what makes the work so interesting and important”

This is also one of the goals of the zine project.

“Zines are informal publications that grew out of the DIY movement. Having migrants create their own publications – including writing the content, doing the layout and design, and coming up a title – is a way for them to tell their stories in creative ways. It helps them to challenge assumptions about their lives and provides them with an opportunity to create something meant to be shared with public audiences,” said Elsa.

The hope was also that real lives expressed so vividly would spark public conversations about asylum seekers, refugees and migrants, and encourage new thinking among policy-makers.

Sara Kindon, Associate Professor in Human Geography and Development Studies, Victoria University of Wellington, also attended the Coventry symposium. While her work does not focus on informal livelihood strategies, it does use an arts-based approach to explore issues of migration and belonging.

Sara’s recent work draws on a form of protest used by women in Chile during the Pinochet dictatorship. These women created tapestries (called arpilleras) using clothing scraps of their sons, husbands and brothers who had been “disappeared”. The tapestries were a way for women to speak out about human rights abuses and state violence.

Now, Sara and colleagues from Victoria University have formed an arpilleras group with Chilean refugee and migrant women living in Wellington. Together they are creating their own tapestries telling of their refugee and migrant histories, and how they are creating new lives for themselves in New Zealand. Last year, the group of 10 women held an exhibition that was attended by the Chilean ambassador to New Zealand. They have also been invited to give one of the tapestries to Te Papa Tongarewa, the National Museum of New Zealand.

For Sara, the event was as much about learning as it was about sharing. She said she would be taking away lessons from the way the CRMC works.

“I want to understand how the different parts of the CRMC work together,” she explained.

“CRMC do all of that here, and there’s such a large number of people involved on a daily basis. It’s inspiring.”

John Marnell, of Gay and Lesbian Memory in Action, a Johannesburg-based NGO, also took part in the programme, talking about work he is involved in on the power of “creative resistance”.

He said: “One reason we have been experimenting with visual methods is because they can help to humanise complex issues. In Southern Africa, LGBTQ voices are rarely heard. This is the same for refugees, migrants and other marginalised communities. The creative methods we have been using allow people to challenge dominant narratives about their lives, in a way that is not always possible with traditional journalism or photojournalism.”

John said visiting Coventry was a “wonderful” experience, “especially seeing the work of CTPSR and the CRMC.”

“It was a privilege to learn from those working here. I’ve enjoyed learning about attempts to open up a safe space for queer refugees and asylum seekers in the UK.”

Why was the CRMC picked to host a seminar?

For Dr EJ Milne CRMC involvement was integral to the success of the Coventry Event “If we are to be serious about our commitment to involve community members as partners we need to make sure our events are held in spaces which enable members to more easily take part and feel more relaxed. Universities can be seen as intimidating to some people, we did not want this. It was also important that we were able to show our commitment to CRMC and support of migrants and refugees in Coventry by coming to CRMC.

Prof. Crawley said “CRMC is one of CTPSR’s strongest partners”.

Sabir Zazai, Director of the CRMC, said: “It was a great honour for the CRMC to be picked to host this session of leading academics from around the world.”

He added: “I hope they will go back to their home countries with a good impression of the work being done in Coventry to welcome refugees and migrants, and the efforts of our staff and volunteers to help people build new lives in this city of peace and reconciliation.”

Caption 1: One of the striking posters created at Elsa Oliveira’s art project

Caption 2: Academics from around the world who gathered at the CRMC with Sabir Zazai (front), Prof Crawley (seventh from left) and EJ Milne (third from right). 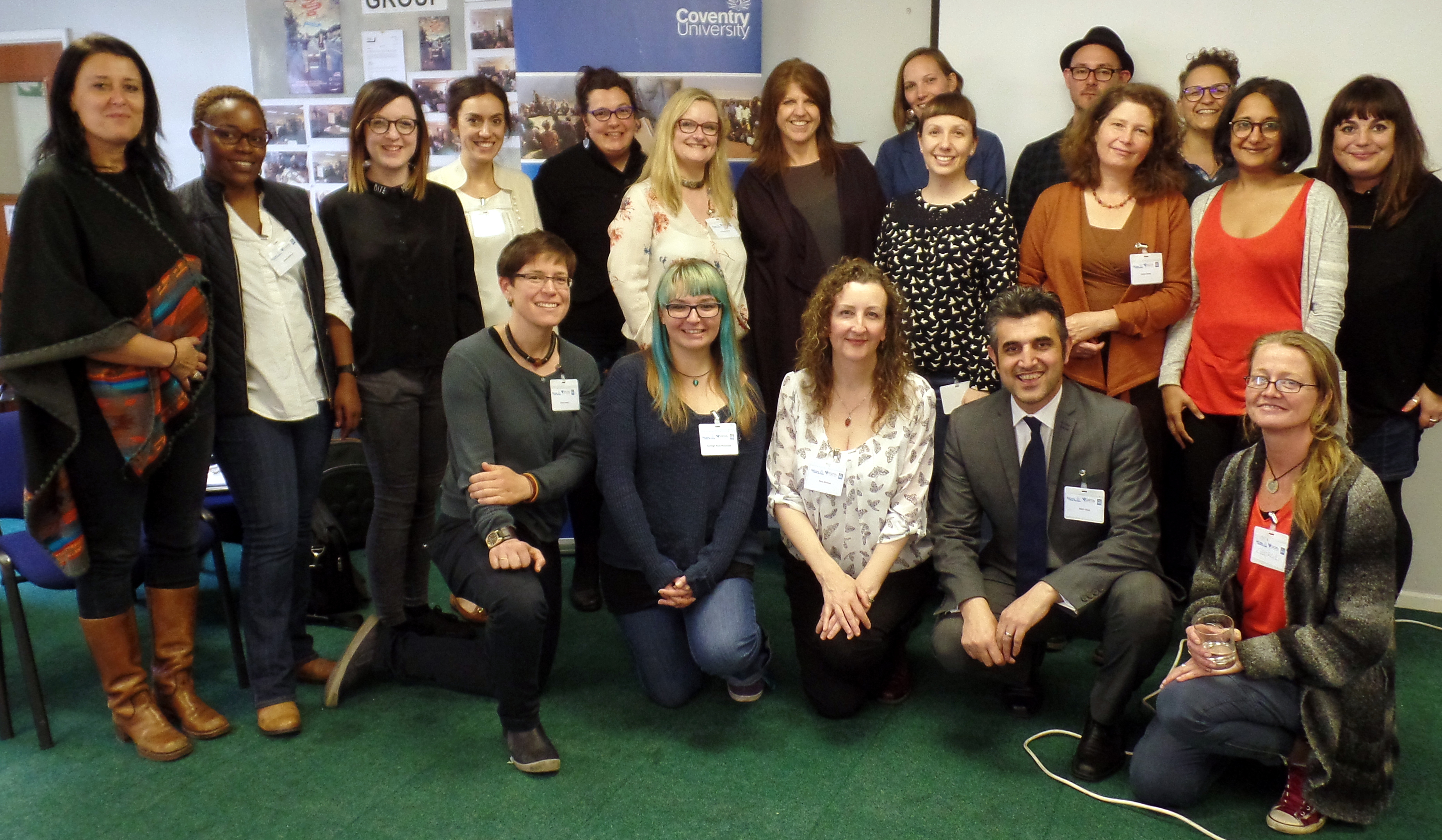 #artsmethods participants at the Coventry Refugee and Migrant Centre, 18th May 2016

MoVE method:visual:explore is a project of the African Centre for Migration & Society (ACMS) at Wits University, Johannesburg.

MoVE focuses on the development of visual and other involved methodologies to research the lived experiences of migrants in southern Africa.  Our approach aims to integrate social action with research, and involves collaboration with migrant participants, existing social movements, qualified facilitators and trainers, and research students engaged in participatory research methods.

All MoVE products can be viewed and downloaded for free on issu.com  This includes exhibitions, zines, photography projects, exhibition catalogues and postcards.